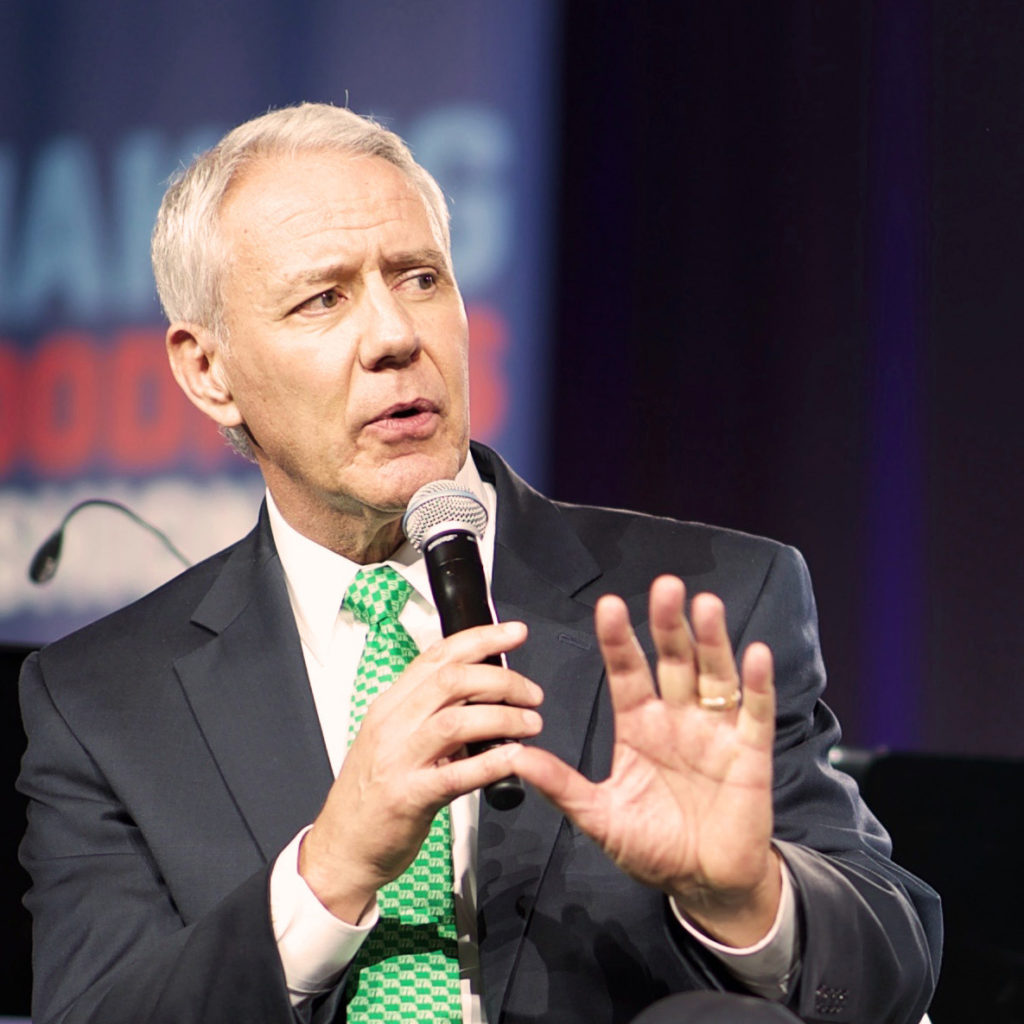 Each Life is a Precious Gift

All of our rights as Americans depend on being safe

Without a border, we don’t have a country.

Giving Rights back to Parents

The Left is on the march, and trying to turn our children against fundamental American values.

Protecting the Right to Bear Arms

I’m an absolute supporter of the Second Amendment, and I fight to protect it every day.

In order to have capitalism, you have to have competition

Right now, we have the highest inflation rate since 1982, and it’s all Joe Biden’s fault.

Starting in 2004, Ken Buck was elected Weld County District Attorney three times. He led a staff of more than sixty people with a strong record of criminal prosecution and crime prevention. Under Ken’s leadership, the crime rate in Weld County dropped 50%, one of the best records in the country.

Ken is a Christian and a leader in his profession and community. Ken has volunteered and served on the boards of many important community groups. As District Attorney, Ken brought together community leaders to create the Juvenile Assessment Center. The Center has helped more than two thousand kids and their families get back on the right path in life. One of the values that I hold dear is the sanctity of human life.  Roe v. Wade was a terrible mistake.  The birth of my children only reinforced this view: that childbirth has something miraculous to tell us about the will and purpose of God, and that each life is a precious gift.  To extinguish that life is a deeply evil act.

I see this principle as being reflected in the Declaration of Independence as well, with the Framers specifically enshrining “life” as an inalienable right for all Americans from the beginning.  I’m 100 percent pro-life, period.  Susan B. Anthony’s List, one of the major pro-life groups fighting for the rights and lives of the unborn, has said:

“Congressman Buck has stood up against the pro-abortion agenda of the Biden-Harris administration and Pelosi Democrats who are actively working to expand abortion access and abortion funding. Rep. Buck has voted consistently to defend the lives of the unborn and infants.”

I’m grateful to carry an A+ from them, the highest possible rating, as well as 100 percent from National Right to Life.  In terms of the specific actions I’ve taken to move the protection of life forward, not just through votes, but by pushing additional legislative protections I have some bills that I’m supporting, listed below. “Original cosponsor” means that I was signed up at the time the bill was introduced, which helps show the bill has broad support from the beginning, making it easier for sponsors to build their coalition.

I’ve also actively pressured the Biden administration through letters with my colleagues working with pro-life organizations.  These are a few of those letters:

All of our rights as Americans depend on being safe.  We must be safe in our streets, safe in our homes, safe in our churches and safe in our businesses.  The rising wave of crime threatens that basic social contract.  I’m a former prosecutor and I’ve convicted hundreds of criminals.  As a nation, we cannot go back to incredible murder rates and lawlessness of the 1980s and 1990s.  The Democratic Party has consistently put forward a defund-the-police, soft-on-crime message, and even some in the Republican Party have forgotten the hard lessons of the last three decades, that deterrence works.  I will always advocate for police, who truly are the thin blue line between law-abiding citizens and dangerous criminals.  These are some of the specific actions I’ve taken to fight for the right of every American to live in a safe community:

Without a border, we don’t have a country.  Instead, every city and state becomes a border town.  I was recently on a border tour with my friend Congressman Andy Biggs and the situation down there is very bad, as any border patrol agent or local sheriff can tell you.  That lack of security has the potential to translate across America, to your town or city.

It’s hard to overstate just how dangerous the Biden border policies are.  His own Department of Homeland Security predicts an influx of 18,000 migrants PER DAY when he carries out his dangerous revocation of Title 42, a public health authority that allows the United States to suspend the entry of aliens that may present a public health risk.  That comes out to about 6.5 million migrants per year–more than the entire population of the state of Colorado.

We’ve got to act, and I have done so on a number of specific occasions to fight for the basic sovereignty and function of the American border and our right to choose, as a people, who becomes an American and who doesn’t:

Here are some of the higher-profile letters I signed on this issue:

The effort to insert Critical Race Theory into our schools as well as radical transgender ideology is something that conservatives must oppose.  The Left is on the march, and trying to turn our children against fundamental American values as well as expose them to sexual concepts that are grossly inappropriate for the public school setting.  If we don’t stop this, we will find ourselves facing a generation of young Americans who hate their history, and are proponents of radical gender ideologies.  We’ve got to stop this stuff, now.

I support the rights of parents to choose what their children learn, and to ensure that the curriculum being taught in the schools they pay for reflects their values, not radical liberal educators.  I support the rights of women to have their own bathrooms, and sports leagues.  There are fundamental differences between the two genders, and if men are allowed to compete, it will spell the end of Title IX as we know it, a law that has provided opportunity for hundreds of thousands of women athletes to excel.

The Framers of the Constitution included a right to bear arms that “shall not be infringed” for a reason.  It’s the safeguard of every other right that we have.  This is why I’m an absolute supporter of the Second Amendment, and I fight to protect it every day from gun-grabbing bureaucrats and government officials who would take that right from us. Here are some of my actions on this front:

I believe that something must be done about Big Tech.  I’m not against success in business, and I have no interest in taking the Democratic approach of micromanaging the economy, but Republicans passed antitrust laws for a reason: in order to have capitalism, you have to have competition.  Without competition, you have no price discovery mechanism, which is the very core of the free market.  If prices don’t change, then the market doesn’t allocate resources properly.  Instead, value is pulled further and further toward the dominant firm, eliminating the ability of anyone else to compete, and hurting the consumer, who has nowhere else to take his business.

Specifically as it regards to the marketplace in tech, I worked on an 18-month investigation of their anticompetitive practices.  The more the Judiciary Committee looked, the more we found.  In one instance, a local Colorado company invented the pop-socket, a kind of grip aid for your smartphone.  They got the product to market and started selling online.  Amazon then copied and started selling its own, knock-off version, just different enough to make an infringement case difficult.  By the time the Colorado company got anything in court, Amazon made millions.  There are dozens of this type of case.  Google controls 94 percent of the desktop search market.  Facebook’s CEO, Mark Zuckerberg, is on record as saying he was buying Instagram so it didn’t become a competitor.

If we want to fight Big Tech, we need to use the antitrust laws to restore competition.  I support fixing section 230 (the special “publisher giveaway” for tech firms), but the core of dealing with this problem is antitrust.  We also need to return control over the internet experience to the user by creating real privacy safeguards for consumer data.  To that end, I’ve sponsored and worked to move forward a number of different bills on the subject, as well as worked on others.

In addition to leading in Congress on antitrust for Big Tech, I am also strongly opposed to the Department of Homeland Security’s “Disinformation Board,” or what many are calling the “Ministry of Truth.”

Right now, we have the highest inflation rate since 1982, 8.3 percent, meaning that the price of goods and services is increasing much faster than people’s wages.  The president’s policies have caused this issue.  He has spent money that the country doesn’t have.  As federal spending goes up very quickly, the economy can’t just simply summon more goods and services into being–those take time to produce, further adding to the upward pressure on prices.

The Democrats have added insult to injury with their no-holds-barred attack on American energy production.  When President Trump left office, he left us with low gas prices and America as a net exporter of energy.  Under this president, gas prices in Colorado have skyrocketed, while the Governor has cut oil production more than 30 percent by adding new layers of red tape and regulation to the energy sector.  Inflation is a complicated problem, but falling energy prices are a major answer, because every good and service in the economy requires energy to produce.  Cheaper energy means cheaper everything, not just gas.

Here’s what I’ve done specifically in the area of energy while I’ve been in office: